Welcome to Deja News, the every Monday article where I talk about the news you already know about, and if you don’t know about it, you’re welcome. And since it’s the first Monday of the month, that means it’s time to start off this week’s Monday article with a little Deja Views, a monthly segment where I pick three movies that are coming out and I give my “quick” opinion on them. Also, if you’re new to the site, Deja News usually isn’t this big BUT between Deja Views and a lot of interesting news happening last week, there’s just a lot to talk about.

In 1982, one of my favorite movies was released in theaters, and it was a complete flop. Thankfully, Ridley Scott never stopped being the mad scientist that he is and continued to tinker away at the film, releasing several versions over the years. This resulted in the movie eventually finding an audience and becoming a cult hit. 35 years later Denis Villeneuve has taken the reigns and now hopes to turn this Blade Runner sequel into another classic.

For me personally, there’s so much that has me excited about this film. Put aside the fact that I love the original so much because even if Blade Runner 2049 wasn’t a sequel, I’d still be excited that the director of “Arrival”, one of the most beautiful and amazing films of 2016, has a new movie coming out. On top of that, the cast is incredible: Ryan Gosling, Harrison Ford, Jared Leto, and everyone’s favorite, Batista. Of course, as a long time fan of the original, there’s some concern that this is all too good to be true, but I thought that about Mad Max: Fury Road and that turned out pretty good.

I’m a sucker for any movie that uses the Groundhog’s Day style of storytelling and since I’m not sure that there’s ever been a horror movie that’s done it, I’m even more excited about Happy Death Day… by the way, If I’m wrong about that, please let me know in the comments because I’ll go watch that movie immediately.

With HDD, I think what’s helped me get even more interested in this movie is the fact that the director actually knows what he’s doing. Christopher Landon delighted audiences with his surprise hit, “Scouts Guide to the Zombie Apocalypse.” I don’t know if HDD will be end up being the next big box office hit like last month’s “It”, but what I do know is that this is a film that looks like a lot of fun and quite frankly, I feel like it’s been a while since we’ve had a fun horror movie at the theater. 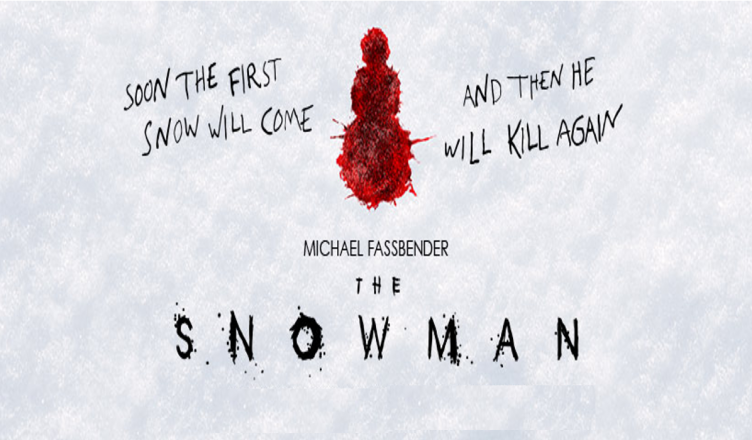 Let’s be honest, this is a dumb title for a movie. When I first heard of The Snowman staring Michael Fassbender, I pictured some cheesy horror movie where a snowman comes to life and Fassbender has to fight it to the death… now that I say that out loud that actually sounds kind of cool. Instead of Magneto vs Frosty The Snowman though, what we’re actually getting is a “who done it” murder mystery about a serial killer that puts people’s decapitated heads on top of snowmen.

Directed by Thomas Alfredson, the man that brought us one of the greatest vampire movies of all time, “Let The Right One In,” there’s absolutely no reason to have doubts with this movie. And much like Blade Runner 2049, along with a great director comes a great cast. Along with Micahel Fassbender, we’ve got Chloë Sevigny, Val Kilmer (would it be too lame if Ice-Man was the snowman killer?), JK Simmons, and Toby Jones. Hopefully, this movie delivers because I absolutely love movies where there’s a guy doing investigation work, meanwhile the investigator is constantly being taunted by what he’s hunting. Silence of The Lambs and Zodiac (two of my favorite movies) immediately come to mind. We’ll find out on October 20th if this Snowman is a hit or if it…. melts.

Sure that was a bad joke, but just keep in mind this entire time all I’ve wanted to do was ask the question…

With the latest trailer for Red Dead Redemption 2, players are introduced to Arthur Morgan, a man who doesn’t seem to mind getting his hands dirty. Whether it’s train heists, robbing banks, or shaking people down for money, by all accounts, Arthur appears to be a bad guy. Unlike the rest of the internet though, I’m not interested in making up what might be in this game. Instead, I think it’s important to put what’s shown off in the latest Rockstar trailer into context.

In the original GTA V trailer we were all introduced to Michael. It was after this trailer’s release that click chasers started speculating on what we would be getting from the game. Is “Michael” a fake name? Are we really playing as Tommy Vercetti, the now aged main character from GTA: Vice City? Is the character we see running from the cops CJ Johnson, the main character from San Andreas?

One of the only early speculations that ended up being correct dealt with the heist that we seen in the trailer, and like the great singer Meatloaf said, 1 out of 3 ain’t bad… This trailer doesn’t even reveal the other two playable characters: Franklin and Trevor. The reason I bring this up is because Red Dead Redemption 2 is going to be a very long game. Even if it isn’t Witcher 3 long, gamers will still put nearly 100 hours into it. To think that a 2 minute trailer can actually show off everything this game has to offer is just silly.

With a Spring 2018 release, there’s a lot of time left for Rockstar to show off their highly anticipated game. As I said in last week’s Deja News, I fully expect to see the next big reveal to come at this year’s PSX on December 9th. Whether that reveal shows off more single player or the multiplayer mode that Rockstar claims to be revolutionary is still up in the air. No matter what they show though, based off the first trailer and Rockstar’s history, I can’t wait.

Marvel vs Capcom Infinite is a flop?!

Did you know that Marvel vs Capcom Infinite was out? Yeah, me neither. Apparently, it’s out and sales have not been very good for the once popular fighter. Sales numbers from the UK for Infinite are out and the game opened at 12, selling less than Nintendo’s Pokemon fighter Pokken which was at the time in 5th on the UK sales chart. Keep in mind that Infinite is out on all console whereas Pokken is only on the Nintendo Switch. And before anyone corrects me on that, I know it’s on the WiiU but let’s be honest, no one is buying that version.

So, why did MVC fail? Well, as someone who has played A LOT of Marvel vs Capcom 2, I have two theories. Theory one is the simple fact that a little game about a little show you’ve maybe never heard of called DRAGON BALL FIGHTERZ has stolen all of the momentum and hype when it comes to upcoming fighting games.

From the developers of the Guilty Gears series, a 3 v 3 fast-paced fighter based on one of the most popular anime of all time is all fighting fans could ask for. On visuals alone, Dragon Ball FighterZ leaves Infinite in the dust. On top of visuals, I know myself personally have been begging for the Dragon Ball series to step away from the open world fighters that had been coming out and embrace the more classic 2-D style. The fact that it is finally happening couldn’t have me more excited.

My other theory is even simpler than the first. The roster sucks.

The series was originally called X-Men vs Street Fighter and now there are 2 characters from Street Fighter and NO X-MEN. It was bad enough when Captain Commando, one of my favorite characters, didn’t make the jump to MVC 3 but the fact that now so many fan favorites are just gone from the game is completely ridiculous. What’s even worse is the rumored reasoning behind the exclusion. Disney doesn’t own the rights to the X-Men movies so they have no interest in promoting the characters.

On top of the missing characters, from an outsider’s perspective, there’s nothing fun about the roster that makes it stand out. Where’s Howard the Duck? And while it’s interesting that a Monster Hunter character is coming in the form of DLC, why wasn’t that a launch character? I’m sure they play very different, but this game didn’t need two Mega Man… Mega Men… Mega Mans. Why not someone from Onimusha, Asura’s Wrath, God Hand, or even Rival Schools. It feels like Capcom is scared to brag about the fact that they have a long history in this business. That or they’re not confident in the idea that people will be excited to see these characters again. Instead of keeping characters like Captain Commando hidden, why not use a game like Marvel vs Capcom Infinite to reintroduce these long lost characters to the fans. Who knows, maybe if they did that, Capcom could go back to making more than just Resident Evil, Monster Hunter, and games featuring Ryu.

That’s it for this week’s Deja News and Views. Sorry for this week’s article being so long. To tell the truth, I actually had another news story I was going to talk about but I decided to push it to this Friday.

But with everything I talked about today, what are your thoughts? What movie are you excited to see this month? And what about that Red Dead trailer? Did it get you more excited about the game or are you already tired of all this build up? And finally, did you buy Marvel vs Capcom Infinite, did you like it, and if you didn’t buy it, what are your thoughts on the latest installment to this franchise? Don’t forget guys, the reason I ask all of these questions is that I’m hoping to keep the conversation going whether on the site or back on the Facebook page. See you Friday!