Is Dragon Ball FighterZ The Game of The Year?

At the end of every year, people from around the world come together and list their top 10 best games of the year. Well, this year I’m doing that but I’m doing it in a way no one has ever done before. This is 100% original. Nowhere else in the tubes of the internet has anyone ever tried this. At Thinks of a Thoughter, I, Chris Williams, am going to update my game of the year list live in front of the millions of people who have yet to discover this wonderful site. Will I play everything that comes out? Nope! Will I try to play as many interesting games as possible? Yep! And with that introduction out of the way, it’s time to ask the question, is Dragon Ball FighterZ the game of the year?

Dragon Ball FighterZ is hands down one of the best looking and most fun to play fighting games on the market when it works. For those of you who aren’t aware, DBFZ has been dealing with a very odd bug that makes it extremely difficult to play with friends online. Every time I have tried to play this with Secret Thoughter M we have nearly 30 minutes every time trying to find workarounds so that we can play together. I’m not kidding when I say 30 minutes either. We’ve had to restart the game, restart our PS4’s, and the weirdly enough to fix the issue last time, I had to change my DBFZ fighter profile name. For some reason, that did the trick. What makes this all the worse is the fact that we specifically bought this game so that we could play against one another. Seriously, online play hasn’t been this frustrating since I had my SEGA Genesis. I’m still not sure how to hook that thing up. It is important to note that Bandai Namco, the company behind DBFZ, has issued a statement about the connection problems and that they are currently working on a solution.

The saving grace for FighterZ is that when the game is up and running players are greeted by one of the most incredible fighting games on the market. For any Dragon Ball fan like myself or “M”, this game delivers nearly everything a fan could ask for. For years, fans have waited for a Dragon Ball game to come out that actually looks like the show and DBFZ grants that wish with near perfection.

On top of the visuals for the characters, once the game gets in motion and players start landing combos and firing blasts at one another, the screen becomes filled with a controlled chaos that longtime fans of the show are so used to. And I’m not sure what magic has been used to make this happen but no matter how chaotic the screen gets, I never felt like I lost control of what’s going on in the game.

While visuals are nice, we all know that when it comes to fighting games controls are king. So how do those combos and Kai blasts feel? Speaking from the position of a casual fighting game fan I can say that the game is easy to pick up. In an odd way, I’d almost compare it to Super Smash Bros. To complete the characters moves are all done the same way and it’s that fact that makes the game easy to pick up for someone like me that wants to see shiny images appear on my screen. The thing that I think will make Dragon Ball FighterZ one of the most competitive and respected fighters out there is just how deep the game is.

As I said, all of the characters moves can be done the same but for the players that are willing to dive into the systems of the game will learn that there’s so much more available then just basic combos. I decided to get brave and jump into an online ranked match and was met by a player who made me realize that there are levels to this game. I wasn’t completely embarrassed but I was definitely in over my head, but surprisingly, I never got frustrated. Instead, I found myself wanting to learn the different systems of the game because I wanted that reward of knowing that I was responsible for completing such an amazing looking combo. 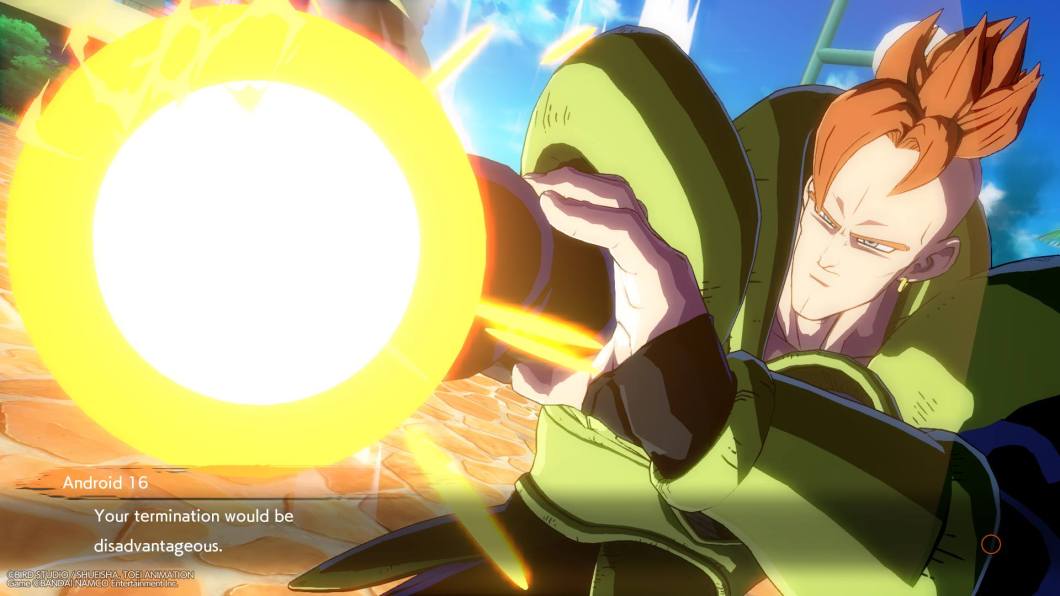 I did mention earlier though, that the game wasn’t perfect. Besides the connection issues I’ve had with the game, I think the initial design of the game is a really big mistake. When the game starts players are put in a lobby where they are able to walk around and go to the different options available to the players like arcade mode, story mode, ranked mode, etc. Oddly enough, players can click a button that will bring up a menu that makes it easier to get to the different modes. I’m honestly not sure why this just isn’t the base format for the game. The lobby is a cute addition to the game but honestly, it’s unneeded.

On top of the lobby, the other big feature of the game that seems to be a bit of a letdown is its story mode. Don’t get me wrong, in terms fighting game story modes, what DBFZ has to offer is completely acceptable, but when you consider the fact that the game’s arcade mode doesn’t offer character-specific cutscenes following the completion of that mode like there is in Street Fighter or Injustice, it makes what occurs in FighterZ’s story mode that much more important. While I do enjoy the unique idea of being able to form different teams with the game’s cast, level them up through different fights and unlock different items for power-ups, I think it all really feels like the developers came up with an interesting game design and then tried to wrap a Dragon Ball themed story around that and while the story isn’t bad, I think a more polished linear story like what we’ve seen out of Mortal Kombat and Injustice, would have suited this game better. Obviously, it would be unfair to judge the game on what it doesn’t offer and as I’ve said, what’s there is fine. It’s always nice to watch the Dragon Ball cast experience a new story, even if it’s not the best of the franchise. Don’t get me wrong, it’s not Garlic Jr. bad but it could have been better.

Even with its few missteps though, I feel like Dragon Ball FighterZ does what it ultimately set out to do which was deliver an incredibly fun fighting game for not only long-time fans if the show but newcomers that are only interested in playing it because it’s a solid fighting game. Funny enough, I’ve actually seen people online who picked the game up simply because it was a fun fighting game suddenly start asking Dragon Ball fans if they should finally watch the show because of how fun the game is. If that’s not a recommendation for a game, I’m not sure what is.

Is Dragon Ball FighterZ the game of the year? For now, yes. Is it because it was the first game I reviewed this year? Maybe. Could its place on that list change relatively soon? Maybe. None of that matters though because Dragon Ball FighterZ is Thinks of a Thoughters’ Game of The Year.