Is Monster Hunter World The Game of The Year?

Whether it’s making vegetarians question their way of life or being a metaphor for colonial invasion Monster Hunter World has been giving the hot takers of the world all they could ever ask for. Unfortunately for them, they didn’t know about me. It’s time for the biggest hot take anyone’s had about this game. Today I’m going to tell you the truth. Today I’m going to tell the world if Monster Hunter World is the game of the year.

For years I’ve watched the Monster Hunter franchise increase in popularity year after year. I’ve watched in frustration as it’s most recent releases come to consoles and handhelds that I didn’t own. So when the announcement was made that Monster Hunter would be coming to current-gen consoles, I was beyond excited and as more and more information came out about the game I found myself trying to learn as much as I could about Monster Hunter World. At first, I was overwhelmed with everything the game seemed to offer and that was before I had even started playing.

When I finally jumped into the game though, I quickly realized that while the game didn’t handhold players, the way information was given out was done in such a way that I’ve yet to have the anxiety attack I expected to have. In fact, instead of dealing with a frustrating game full of unbearable systems, I found myself exploring the game’s world in hopes to learn as much as I could.

And after trying to digest as much information the game had to offer early on, I found myself in an ancient forest on my first hunt. Trying to maintain focus on my first monster became increasingly hard as I ventured further and further into the forest. With every corner I turned I was greeted with a new plant type to collect, rocks to mine, and smaller creatures to catch with my net. Eventually though, after following the creature’s footprints, I was met by a giant lizard that spits acid at anyone that tried to challenge it.

As the battle waged on, the creature eventually fled and I quickly found myself in pursuit of the monster I was once intimidated by. With the creature out of my sight, I could only use the footprints it left in hopes to find it. To my shock, a scream filled the forest. As I made my way towards the noise I found myself watching the giant lizard involved in a literal turf war with another monster that looked like Sharptooth from the Land Before Time. Before I knew it, the once intimidating lizard was being rag dolled by this new monster and as their battle ended, the lizard limped away. I slowly followed but made sure to stay hidden as not to attract the attention of the newest monster. Soon though, I realized I had followed the creature back to its lair. Either it would kill me (in which I’d get two more chances at it before it was game over BUT THAT’S NOT IMPORTANT FOR THE DRAMATIZATION OF THIS STORY) or I would kill it and the battle continued. As the creature and I fought it got more and more desperate for survival, unleashes new attacks but this was its downfall. As it tried to roll towards me, it ran into a tree, and the creature found itself tangled in the vines of the now knocked over tree. This was my opportunity. I pull back my bow and filled the monster with as many arrows as my stamina meter would allow before it was finally killed. After the hunt, I loot the monster for any resources it has so that I can eventually make some new armor and weapons. Thankfully, the experience of the hunt was a lot of fun because I’m going to be required to do it at least 3 more times before I can make anything using the monster’s remains. 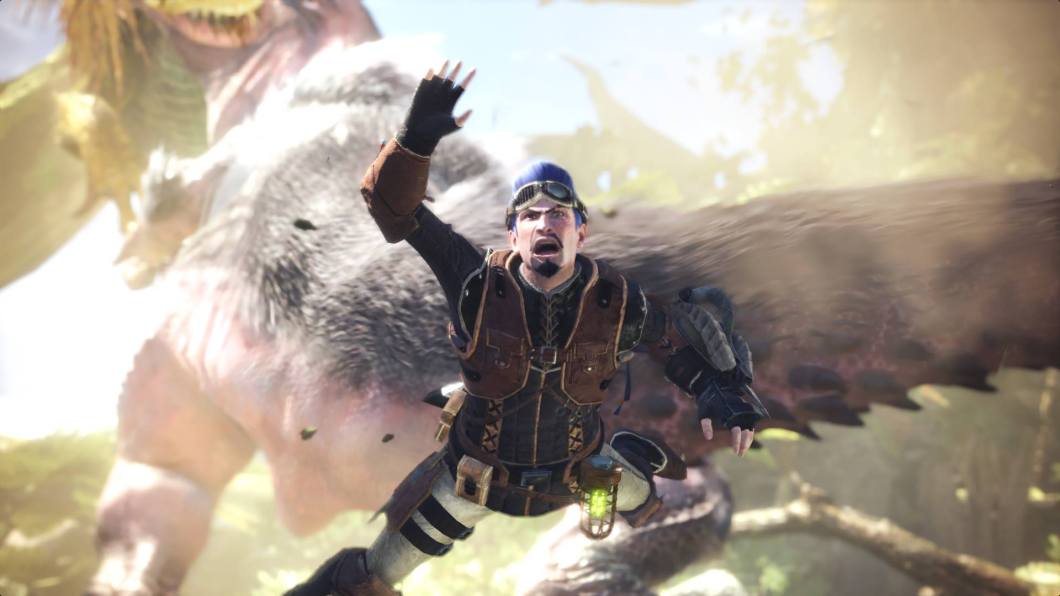 Thankfully future hunts are easier because my friends and I have figured out how to solve the Rubix Cube-like experience of sending each other friend invites. While it’s not original Dark Souls levels of complicated, the game’s lack of explanation for how multiplayer works, certainly makes it feel that way. Getting past its complications, hunting down monsters with a group of friends is easily one the most fun experiences I’ve had in any game. Not only the hunt itself but the aftermath of everyone going back to the blacksmith and crafting new weapons or armor. Maybe someone says they need to hunt down a particular type of monster to complete their helmet and before you know it, we’re off on a new adventure to help out our friend.

I think that’s what makes the game so spectacular. Yes, there’s a story but to be honest, I’m not really paying that much attention to it. I’m a hunter and we’re exploring a new land. Great! The real story of Monster Hunter World is what happens during the hunts with friends. Watching a friend work really hard to get that armor set they want or amazing moments that happen while out on a hunt. Whether it’s a friend mounting the back of a giant monster while the rest of the party attacked the creature from the ground or having two friends simultaneously climb up the side of a mountain while a fire-breathing monster’s attack just barely misses your feet.

While there’s still a lot that I haven’t unlocked or discovered in Monster Hunter World, I know that the things I have discovered are fantastic. And while the learning curve for new players is steep, the game is backed by not only a great community that’s willing to help newcomers but it’s also filled with such interesting systems that make players want to learn. At times, it’s needlessly complicated but overall, the things that Monster Hunter World does right, easily makes it the newest winner for Thinks of a Thoughters’ Game of The Year.